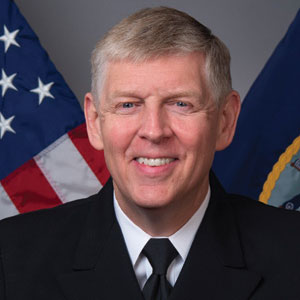 As Chief of Naval Research what are some of your key roles and responsibilities that you have on a daily basis?

This is one of the greatest jobs in the world, and part of that is because it spans so many different roles and responsibilities, all of which support the mission of national defense. My main daily charge is as the Chief of Naval Research (CNR) where I oversee operations of the Naval Research Enterprise (NRE).

The NRE consists of the Office of Naval Research (ONR), the Naval Research Laboratory (our Navy corporate lab, where a lot of really exciting research is being done), the Office of Naval Research Global (our international arm, with offices across five continents), and NavalX, a new command to spur innovative ties to industry and get technologies turned around quicker. So altogether, I lead about 4,000 truly amazing folks dedicated to the defense of this nation. And, I also serve as the Senior National Naval Representative (SNNR), where I interact with my equivalent research leaders in other nations. The bottom line is that I get to lead a group of highly motivated and hard-working military and civilian scientists and engineers, dedicated to providing our sailors and marines with the technologies to keep the peace, and when necessary, win the fight and get home safely. We work with industry, large and small, as well as with academia around the world, in order to truly Reimagine Naval Power. How can we do things better, deliver new capabilities faster, and provide our men and women in uniform with the tools they need? What is a great idea that might seem unreachable, but if we approach it right, just might succeed? You’ve probably seen stories about lasers on ships or the Sea Hunter unmanned surface vessel, or many more – all of that was sponsored by the NRE.

Please elaborate on the need for change in DOD acquisition, acceleration in delivery of products to the user (sailors and marines), and overcoming bureaucracy?

We are in a critical time right now, and we need to reimagine naval power—and that includes how we get new, great ideas into actual production, and in sufficient numbers. A key part of that is figuring out the acquisition side of things and overcoming decades of bureaucracy—some of which is slowing us down today. The U.S. came out of the Cold War as the unquestioned leader of the free world. But as every business leader, and every history buff knows, with success can come unforeseen challenges, including lethargy and a tendency toward bureaucracy, which can slow us to a crawl. Today, we hear from businesses, both large and small, telling us that our contract awards take too long, there is far too much paperwork, and we are rooted in business practices decades old, instead of being on the cutting-edge. To get new capabilities into production faster, I am advocating that we need to have an individual in the U.S. Navy/USMC—who I notionally call the Fleet Experimentation Commander—who is authorized to cut through red tape, get technology prototypes into the warfighters’ hands and onto ships, aircraft, and submarines much more quickly, and avoid death by paperwork. This person would then have the ability to “own the bridge over the Valley of Death” and get our sailors and Marines the capabilities they need—not a decade or two down the road, but in a year or two. He or she would be focused on solving real war fighter problems by working with industry, academia, and government labs to seek out solutions and have the resources to run experiments to demonstrate to those war fighters how viable solutions work (or do not work) to solve their problems. This experimentation mindset is critical to success!

​We are in a critical time right now, and we need to reimagine naval power—and that includes how we get new, great ideas into actual production, and in sufficient numbers

The bottom line is, we cannot keep doing things as we did them in 1985, and think that is enough. It’s not. Our adversaries are moving really fast, and advancing—in some cases, surpassing us in technological capabilities. We must do things differently. Our national security demands we do better. And we can do it, we always have, as a Nation, when faced with a challenge. But it’s urgent, right now, to reimagine naval power. What we do, or don’t do, this decade, will determine this century.

Can you give us more details on the need to be innovative in how the DOD does its job and meets the challenge of adversaries moving quickly?

It’s important to take a breath and remember that we still do a lot of things right. We absolutely have the best equipped and best-led military in the world, and we have made some good progress in addressing the challenges of innovation – things like new contracting via Partnership Intermediary Agreements (PIA) or Other Transaction Authorities (OTA), for instance. And for our large and highly complex platforms – the Columbia class submarines, the Joint Strike Fighter, the Arleigh Burke Destroyers, and others – the acquisition system has generally worked. Where we struggle most is in getting new capabilities over the hump and into production. I’ve been advocating for a concept I call the Strategic Hedge. That is, we need a “hedge bet” to those large, complex subs, aircraft, and ships – a Strategic Hedge that will confound our adversaries who have had decades to watch our platforms in action, and planned on how to defeat them. My Strategic Hedge vision begins with “The Small, the Agile, and the Many.” In essence, I’m calling for a new emphasis on Small (in size, and in cost), Agile (in movement, and ability to rapidly adapt with software enable attributes), and Many (being able to be produced in the thousands) autonomous systems. It’s crucial to realize that AI and uncrewed systems are the key to the future. And building a strategic hedge to complement (i.e., support, not replace) our large, powerful and few platforms, is absolutely what we need to do.

If we build out that uncrewed, autonomous Strategic Hedge, and create an Experimentation Fleet Commander with the power to cut through red tape and get new capabilities into production, we will be in a good position to win the challenges we face from peer competitors.

What would be your piece of advice for your fellow peers and leaders?

We need to have a sense of urgency. A really interesting study just came out, titled “Mid-Decade Challenges to National Competitiveness,” that is in many ways a validation of some of the ideas we’re talking about in the NRE. That study, chaired by former Google CEO Eric Schmidt and with an introduction by former Secretary of State Dr. Henry Kissinger, notes specifically where China, for instance, has taken the lead in some critical technological areas. And they, like me, recognize that we need to act now, this decade! In the meantime, I’m not waiting around. I’ve got an initiative I call Scout that is underway this year looking for new ways to solve real world problems by enlisting a team from industry, academia and government to solve these problems now. I’m building a team of disruptive thinkers who are pushing the limits and working to accelerate our ability to work with war fighters to identify their problems, put them in terms that people with solutions can understand and then facilitate experimentation to prove that a proposed solution works or doesn’t—with war fighters, engineers, and scientist standing side by side to observe the results. For things that work, we are seeking innovative ways to accelerate the fielding of the capability. If we do this right, we are going to transform the nature of warfare and we are going to put our adversaries on their heels. It’s amazing what can be accomplished by focus sing a small, diverse team of government, industry and academic innovators on a real problem and giving them the latitude to try new things. We can and we must do this now.

What It Truly Means For IT Security To Bea Business Enabler

Policy is a Key Solution to Stopping Packaging Waste

Congestion-Driven Basis Risk, A Challenge for the Development of...